The Franklin Institute’s Fels Planetarium provided a the perfect backdrop for a summer “evening under the stars” as the Franklin presented a sneak peek of the 2012 Philadelphia Science Festival.   While I expected the guest list to feature the “usual suspects” (ie. media, donors, etc.), it also contained some special guests that really made the this party a “hoot!”  Check out the fun!

The Science Festival is a 10-day, citywide collaboration showcasing science, technology, engineering and mathematics.  At first glance, it doesn’t scream out “fun and adventure,” or at least that’s what I thought when I first heard about it in  2011.  However, I quickly learned that there is literally something for everyone  in the amazing 75 (!!!) events that will take over the city between April 21 to April 28, 2012.

Your inner geek is going to spin into overdrive with Signature Events, Science Carnival, Neighborhood Science, Science Cafes and Astronomy Night.  Activities will of course take place in Philly’s traditional museums and libraries, but they will also invade “real world” street corners, restaurants, cafes and bars — even Citizen’s Bank Park!  (Talk about a grand slam in the name of science!) What’s the goal off all this?  First, organizers want to remind us that Philadelphia is and has been center of all things science and technology since the days of our founding fathers.  Second, they want to keep Philadelphia and science in the spotlight by offering science programming that is exciting (ie. FUN!) and accessible to every resident.  With a pitch like that, we are game!  Let the science fun begin!

The media preview gave me a taste of great things to come!  Some of the attendees included dancing robots, a Spectacle owl, an enormous frog, real-life Science Superheroes and even a cupcake chemist (or so I nicknamed her).  My favorite activities included:

The last place I expected to see a cupcake was the Franklin Institute.  Yet, there they were!  The Chemical Heritage Foundation provided a taste test on the chemistry of baking using cupcakes.  The cupcake chemist really challenged me — and I felt my title of “King of Philadelphia Cupcakes and Desserts” was in jeopardy.  Have no fear!  I aced the test and learned a lot about the science of cooking and cupcakes.  Check out the Chemical Heritage Foundation during the festival and the Science Carnival.   For more info, click the event page here.

Robotics Expo by Drexel University (CHECK OUT A VIDEO OF THIS ON MY YOUTUBE PAGE!)

The folks at Drexel introduced me to two of the most talented robots I have interacted with.  One of the robots actually learned and calibrated itself to the music on a piano keyboard in front of it, and then it performed a song.  It was amazing to see the robot learn the position of the keys and jam for the growing crowd.  The second robot really knew how to bust a move as it danced to not one, not two, but five or six different kinds of music.  All of the songs had varying beats and sounds, and the robot kept up without missing a step.  This preview totally reminded me of my days growig up with Omnibot and thoughts of robots living in our homes like the Jettsons.  Therefore, my inner geek jumped out of my skin as they told me about Robotics Discovery Day and the Robotics Expo, where you can learn from the Philadelphia businesspeople, engineers and students who are transforming science fiction into science reality! For more info, check out the event summary page by clicking here.

The Philadelphia Zoo brought along two of my favorite “party” guests.  I am a big sucker for animals — and I love to learn about them and observe them.  The Zoo showcased their Spectacle Owl and their enormous frog.  These beautiful creatures were there to draw interest to the Astronomy Night they are co-hosting at the John Heinz Wildlife Refuge.  Grab a blanket and take a tour of the cosmos with local astronomers!  Professional and amateur astronomers will bring out their telescopes to show locals the wonders of the night sky.  This special night also will teach about bird migration and moon watching.  Other sites are also available for Astronomy Night.  See the full schedule by clicking here. 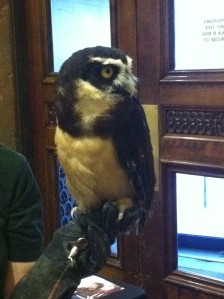 As the Festival gets closer I will talk about other things I saw at the media preview, and give my “Best Bets.”  Keep reading and coming back!

Tickets are officially on sale NOW!  One of my favorite things about the festival is that there are some paid events, but many, many FREE events.  All events, though, need a ticket (except for the carnival).  Tickets can be purchased or reserved here.

Disclaimer:  No monetary compensation or in-kind items were provided for this post.

A blog about Philadelphia's fun and unique adventures, arts, events, food and opportunities.
View all posts by Philly Loves Fun »